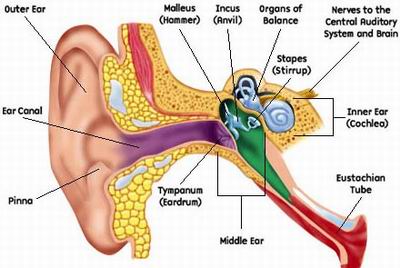 The outer ear is made up of the pinna (auricle) and ear canal(external auditory meatus). The ear drum (tympanic membrane) separates outer and middle ear and is generally considered to be part of middle ear. The middle ear also includes the tympanic (middle ear) cavity; the osscicular chain with its associated muscles ,tendons, and ligaments; and the Eustachian (auditory)tube. The inner ear begins at the oval window. It includes the sensory organsof hearing (the cochlea) and of balance (semicircular canals,utricle, and saccule)

The external ear is composed of the pinna and the ear canal, ending at the tympanic membrane.

Pinna is a latin term for wing or projecting part of ear lying outside head. It is also called as Auricle. In latin term ‘aural’ pertains to ear. It’s the externally visible aspect of ear, irregularly shaped ovoid of highly variable size.It folds at the side of head at 30degree,situated posteriorly, superiorly and interiorly.It is composed of skin covered elastic cartilage.It contains some undifferentiated muscles and number of extrinsic muscles which are vestigeal in humans.

The major landmarks of the pinna are highlighted in the above figure. In the following the description about these landmarks are given.

Concha-It is the entrance to the ear canal and at the bottom , it’s large cup shaped depression.

Anti-tragus-To the opposite of tragus,a smaller ridge forming an inferior boundary of concha,is called the anti-tragus.

Helix –The ridged rim along most of the perimeter of the pinna.

Crus of helix-Starting at the very top of pinna, the helix courses anteriorly and downward, making a hook like turn in the posterior direction to form a shelf above concha

Lobule-Helix courses downward along the posterior perimeter reaching the ear lobe or lobule.

Cave-Inferior part of concha divided by crus is called cave.

The core of the auricle consists of a fibrous cartilage,shaped roughly similar to ear. Medially the auricular cartilage is continuous with the cartilagenous skeleton of the ear canal. The anterior, superior and posterior auricular muscles which are attached to the auricle are vestigeal. Some small intrinsic muscles extend from one part of auricle to other are also non-functional.

The auricles are highly variable in their shape, to the extent they have been used for purposes of identification much as fingerprints have been used.

Communication between the middle ear & the inner ear and the external environment is provided by “external auditory meatus” or simply “ear canal”. It leads from the concha to eardrum or tympanic membrane. It varies both in size and shape. The outer 1/3rd portion is cartilagenous, remaining 2/3rd is bony. The junction between bony and cartilagenous portion is called ‘isthmus’.

EAM is a curved and irregularly shaped tube called ‘S’ shaped. The course of ear canal is more horizontal in infants and small children than adults. The diameter is largest at the ‘Auricular (external) orifice, gradually smaller toward isthmus, expands again only to decrease in size just before the tympanic membrane.

LINING OF THE MEATUS

The skin lining is closely adherent to periosteum and perichondrium of supportive skeleton. It forms the outer layer of ear drum’s membrane. The canal’s skin is thicker in the cartilagenous segment than in bony part. The bony portion of canal is derived from

i)Collecting/Funneling sounds to the ear canal

i) Funneling sounds to the ear canal

Acoustically, the pinna without the concha is termed the pinna flange. It has minimal acoustic effect. The pinna with its ridges, grooves and dished out regions, is an excellent funnel for information directed toward the head from front or side, although less effective for sound arising from behind the head.

The collection of sounds or funneling function is not significant for human pinna. This was examined in two different ways (Békésy and Rosenblith, 1958)

Thus pinna has no role in collection of sounds to the EAC.

The pinna’s greatest contribution to hearing is probably in sound source localization. The obvious example occurs when a pet turns its ears towards a ringing doorbell. This action is impossible for man, whose extrinsic ear muscles are vestigial. However, head turning in both humans and animals orients the ears relative to the stimulus, which, along with difference in the intensity and time of arrival of a sound at the two ears permits accurate localisation.

The pinna contributes to localization in man, particularly when listening with only one ear (monaural localisation) and when the sound source is in the median plane of the head rather than off to one side. Pinna effects are important in these two situations because monaural hearing precludes the use of the inter-aural difference available during binaural hearing, and because these inter-aural differences are minimized in the median plane, where the sound source is equidistant from both ears.

There are two hypotheses to explain how pinna helps in localization:

Batteau (1967) showed that sounds reflected from the structure of the pinna cause time delays between the reflected and direct source on the order of under 300 micro sec. Since these very small delays are detectable, they may be used in median plane and monoral localization (the difference between actual signal and reflected signal is different for different directions which helps in localisation).

Frequencies over 4000 Hz are particularly important in these effects.

Types of localization are:

Horizontal localization is made possible by differences in Interaural time and intensity differences.

Sound will arrive at the ear closer to the source (near ear) before they arrive at the other ear (far ear).The resulting difference in time at the two ears is called the Interaural time difference.

Klumpp and Eady (1956) determined the minimal time delay permitting listeners to lateralize a tone correctly to the side of the leading ear 75% of time. A minimum of about 10usec found for 1 KHz tone.

Figure: The distance from the sound source to each ear is different therefore the sound is delayed longer in reaching the far ear. This helps humans perceive the spatial location of the sound.

Reduction in the amount of intensity when the signal is reaching the far ear side.

The ear that is farther from the sound source will often not have a direct path for the sound wave to follow because the head is in the way. This is shown in the figure above. Thus the sound wave reaching the far ear will be attenuated compared to the near ear, creating an inter-aural level difference between the ears (ILD).

This is due to the head shadow effect – A head shadow occurs when the head is between the sound source and the ear being investigated (significant for frequencies over 1500 to 2000 Hz).

ILDs are not linear with frequency. Low frequencies do not appear to be shadowed much by the head because they have a wavelength which is greater than the diameter of the head. Frequencies above 1500 Hz have a wavelength smaller than the diameter of the head, and can be attenuated a great deal. It follows then that high frequency components are much more important to us when evaluating ILDs because they are most affected by the head shadowing resulting from the location of the sound source.

In the medial plane it is made possible by reflections and resonances that occur within the pinna prior to sound entering the ear canal. Reflection causes cancellation and hence spectral peaks and notches. Resulting cues to localization in the mid sagital vertical plane are all above 5 kHz because only in this high frequency region that the wavelength of the sound is small enough, compared to the size of the pinna for necessary reflection and resonance to occur. People can detect changes in vertical angle as small as 3o.

Localization using monaural cues in which stimulus is presented to one ear alone.

Mostly depends on the filtering effects of the external structures. These structures include head, torso, shoulders, and outer ear or pinna. Sounds are frequency filtered specifically depending on the angle from which they strike the various external filters. The most significant filtering cue for this type of localization is the pinna notch, the notch filtering effect resulting from the destructive interference of wave reflected from the outer ear. In order to enhance filtering mechanism, many animals have evolved large specially shaped ears. Many also have the ability to turn the outer ear at will which allow for better sound localization. Bats and barn awls are paragons for monaural localization in the animal kingdom.

Morimoto (2001) investigated the contribution of each pinna to the perception of vertical angle. Tests measured localization of the vertical angle in five planes parallel to the median plane. In the localization tests, the pinna cavities of one or both ears were occluded. Results showed that pinna cavities of both the near and far ears play a role in determining the perceived vertical angle of a sound source in any plane, including the median plane. As a sound source shifts laterally away from the median plane, the contribution of the near ear increases and, conversely, that of the far ear decreases. For saggital planes at azimuths greater than 60 degrees from midline, the far ear no longer contributes measurably to the determination of vertical angle.

The gain produced by the pinna is not very large, approximately 3 dB at 4 KHz. Because of its shape, the effect of the pinna varies considerably with the angle of incidence of the sound.

Concha produces a gain of approximately 10dB at 4-5 kHz but a loss of approximately 5dB at 10 kHz. The concha functions as a cavity resonator. The frequency of resonance depends on the diameter and the depth of the concha. Average concha resonates around 4700 Hz. The deeper and larger the concha lower is the resonant frequency.

The protective function of the external ear canal is directly related to its physical shape and properties.

The shape (S shaped course of the EAC) and its depth of the EAC and rigidity of its walls provide protection to the tympanic membrane from direct injury.

The deeper, narrower and more tortuous the canal, less will be the chances of direct injury.

Acidic ph of the skin surface is another microbial deterrent (6.5-6.8) which is significantly below the optimal ph (7 or higher) for the growth of pathogenic bacteria.

The epidermis lining the EAC is in a unique situation; because of its location, the epidermis is not subject to the usual surface contact (friction) that normally removes those keratinocytes that have desquamated from the surface of the stratum corneum elsewhere in the body.

This means that an alternative mechanism (self cleansing) exists for the removal of dead cells in the EAC.

The concha resonance blends with the ear canal resonance producing a composite curve with two peaks one at 2700 Hz and the other at near 5000 Hz.

Weiner and Ross (1946) – measured sound pressure distribution in the ear canal from a free field sound presented at three angles of incidence: 00, 450 and 900 in the horizontal plane. The pressure distribution in the ear canal at various frequencies varied, and the most obvious pressure gain was reported in the region of 2 – 4 KHz (10 – 15 dB) with a maximum increment of 17 to 22 dB at 3 KHz. The important findings of the study are:

Azimuth is the angle at which the ear is oriented towards the sound source.

The SPL value will differ depending on the azimuth.

This is mainly because of two factors:

Effect of the external ear on Bone conduction thresholds

Tondorf (1968) provided the explanation for the external canal component of bone conduction in order to account for the occlusion effect, in which low frequency bone-conducted signals are perceived as louder when the ear canal is occluded than when it is unoccluded. When a signal is introduced to a skull through an oscillator, the osseous and cartilaginous walls of the ear canal vibrate along with the skull.